Earlier this year I was asked to review the highly anticipated book by Tim Challies. Originally, I had no intention of publishing my opinion; however, as I put together a list of recommended books I see I simply must include "The Next Story: Life and Faith after the Digital Explosion" as part of my collection. My hope is that you prayerfully consider the following and that, should you find yourself as convicted as I, you will seek His will concerning this all too prevalent part of our lives. 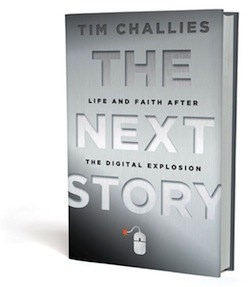 Virtual church communities, the emergence of “gamers” as a cultural subset, online socializing, family disintegration vs. techno-integration—where are we all headed?

“This book began with a question. Actually, it began with an uneasy feeling that begged a whole series of heartfelt questions… Am I giving up control of my life? Is it possible that these technologies are changing me? Am I becoming a tool of the very tools that are supposed to serve me...? How has the digital explosion reshaped our understanding of ourselves, our world, and, most importantly, our knowledge of God? If technology is a good gift from God, with the potential to help us fulfill our God-given calling and purpose, why does it so often feel like we are slaves to our technology, like we are serving it instead of demanding that it serve us? … Is there a way, then, to live virtuously, immersed in this strange new digital reality?”

Challies begins with an invitation to explore the implications of the digital age. The title, borrowed from a poem,[1] tackles the question of where the existential “I” begins and ends. Am “I” the sum of all my gadgets? And if so, what does this mean for my faith? What are the implications for the Gospel?

Part One of the book deals with the necessary why’s and wherefore’s; Part Two renders a more practical how-to.

Major themes of the book:

What are the key ideas of the book?

The redemption of technology for the glory of God

Man’s voluntary submission to technology, becoming a “tool of our tools;” reshaping our lives—even our societal mores—to the convenience of our gadgets.

The Morality of Technology: technology is a tool that reflects the heart of man. As believers, we must biblically consider technology, perceiving it in light of our God-given purpose—“to glorify and enjoy Him forever.”[3] Otherwise, technology is nothing more than another idol for man to worship.

Technology is not additive but ecological, changing the very structure of life and society.

Technologies cause biological change as the human body adapts to its most important influences.

What are the weaknesses of the book?

At times I had the suspicion that Challies sat down one day and developed a writing outline from which he never deviated. The book’s progression appeared to follow a strict formula: “emphasize—elaborate—reiterate.” However much this may delight my (admittedly OCD) scholastic nature, the reader in me wanted more. I think a more conversational style may have better suited the material. Still, this is a small thing, and I would by no means strike a negative view because of it.

It’s Challies. One is tempted to the vulgar colloquialism, “Nuff said.” Tim Challies is a gifted author whose great strengths include his frank and earnest style, and the almost vulnerable nature of his introspection. His writing begins and ends at the Throne and readers are left with the pervading sense of a lifted veil and truth unfolded.

The pages of the book inspired so many “ah-ha” moments for me. However, when I tried to find the exact word or phrase to capture the notion, I found I could not. I discovered that the book—though powerful in itself—actually did more than tell me a series of facts or principles; it introduced me to ideas I had not previously considered—beginning with “in the beginning.” Indeed, Challies’s tour of the Garden included profoundly unexpected byways, every one of which culminated in the grandeur of the Cross. I confess he challenged my thinking in ways that left me startled as the magnificence of the Everlasting met the boundaries of my very limited mind.

At the end of it all, I suppose this is probably the best thing that can be said of Challies—or any other author, for that matter: he caused me to think.

[2] For the sake of brevity, I’ll define the terms as follows: