Thirty Years That Changed the World (Part One)

A simple review of a fabulous book: Michael Green's, Thirty Years That Changed the World: The Book of Acts for Today, (2ndedition) By Michael Green. Erdmans, 2004. 250 pages. 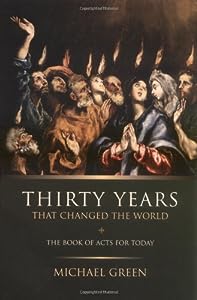 Christian apologist and British theologian Michael Green is the prolific author of more than fifty books. A quick survey of his works reveals a passionate concern for the lost and an earnest desire to equip the saints for the task of reaching them. Serving in a range of capacities including Professor of Evangelism at Regent College, Advisor to the Archbishop of Canterbury, and Senior Research Fellow and Head of Evangelism and Apologetics at Wycliffe Hall, Oxford, Green officially retired in 1997. He is married to Rosemary, and has four adult children.

Motivated by the single word, “how,” author Michael Green sought to reconstruct the reasons behind the explosive growth of the early church, and to practically apply those truths to current cultural landscapes. The fruit of his labor is seen the pages of his book—a thought provoking and highly applicational treatise on how first century Christians moved from the fearful shadows of a despised band of outsiders to the center-stage of history’s drama.

Far from being a strict instruction manual, Green’s book functions more in the way of an inspirational model. This is not to infer a lack of practical application; the book is brimming with the author’s suggestions, personal experiences, and other anecdotal examples.[1] However, Green clearly detailed the reaches of his intention, stating, “I do not propose to take part in the minutiae of historical and theological debate, neither do I propose to write a commentary…” (p. 8) His mode was to outline and explore the themes of the early church and to provide plausible application for modern day believers. I believe he has succeeded.

Technically, the book is well-planned and logically organized according the author’s intention. Green’s table of contents outline his chosen themes; themes from which he rarely deviates. True to plan, these themes jointly correspond to the plights of the early as well as the modern day church. Further, while he does not ignore historical complexities, neither does he confuse the modern mind with minutiae. The thematic flow of the book continues unabated.

On the whole, I found Thirty Years that Changed the World an excellent history for the ancient church and an exceptional handbook for the modern one. Michael Green achieved his stated goal with little deviation. The result is an eminently usable model for ministers and laymen alike—high praise for any book.

In the opening pages of his work, the author confesses his personal passion for the subject of his book—a passion that becomes more evident with every flourish of his pen. Far more than a scholastic or vocational requirement, his genuine love for the Early Church, his concern for their well-being, and his honest admiration for the devotion of their lives underscores every line. And it is the tide of that very current that carries readers through every page. What’s more, Green sustains a humility that reverently traces the patterns of their footfall, adding application to insight.

From the introductory statements, one is struck with the author’s rhythmic symmetry and literary imagery. He has not merely written a book, he has presented a work that is imminently readable. In fact, his style of writing is likely one of his greatest strengths of all, engaging the reader and drawing him in. He paints, as it were, the portraits of long-ago personalities—not with canvas of paint and brush—but with paper and pen. They are set before the reader in so vivid a likeness, they seem to live again. Truly, Green’s literary skill made the reading of his book a pleasure!

The absence of a litany of citations is striking—and refreshing. Unlike other authors, he remained unconcerned with impressing readers with a dusty array of obscure sources; instead, he never roamed far from the Lukan narrative. To be sure, Green does cite other sources—Jerome, Ignatius, and others—but unlike the scholars of today, these men walked the streets and breathed the cultural air of the apostles. They, much more than modern academia understood the issues and nuances of New Testament times. And so, with a view toward discovering the reasons for the success of the early church, Green wove a tale of the Early Church from the very threads of Scripture and in doing so, he showed us the relevance of their story today. In such a tapestry, one cannot help but see the intersecting threads of the ancient and the modern.

The author did an outstanding job of portraying the vivid reality of the believer’s faith set within the larger framework of the corporate Body of Christ. I was by turns inspired and ashamed, sometimes tearfully so, at Green’s depiction of their challenges, joys, and sorrows. Individual believers, living in passionate devotion to their risen Savior Who united them to a living organic church—what an awe-inspiring thing to consider! It was even more amazing to the first century world that witnessed its beginning! Christians, hated by the world, had a sure and strong foundation of trust in the One Who conquered death and the grave, Whose resurrection made sense of all things else. This band of new believers laid their lives at His feet and set forth on Roman roads with His call yet ringing in their ears, “Go into all the world…”

I wonder, what would happen in our world, in our time, if we did the same? How many lives would be won if we at once abandoned our complacency and pride? How many nations would transformed? How many peoples would be evangelized? I wonder, how would our world be different if only we were too?

[1] The author’s discussion of open-air ministry is especially insightful (pp. 120-126)